Though the origin of every natural language is its spoken form!

Arabic writing is famous as an art form, stunning even to those who can’t read it. Writing the Quran beautifully is an act of worship in Islam—Allah is beautiful and loves beauty1

But before diving into any advanced topic, we must start with the basics: Arabic is written from right to left! Moreover, Arabic letters are always written in a ‘cursive’ style. This means letters in the same word connect to each other (with systematic exceptions).

Depending on these connections, the shape of each letter changes. This helps optimize text to make reading and writing easy, but it can be a big challenge for new students. Every letter in Arabic has rules for when written isolated, or at one of three possible positions in a single word: the beginning, middle and end.

All four of the shapes above are the same Arabic letter Hā. Depending on the connections that come before or after it in the word, the shape of the letter changes.

This can be shocking at first glance. But there are features of the letter that are always present to make things much easier. In the figure above we see that:

While a bit hard to learn at first, the different letter forms make writing by hand much more enjoyable. Also, many other languages also have variant writings for the same letter. English has a system of capital letters, some of which have no similarity to their alternate case!

For example, the figure below has three different letters of the alphabet. They look exactly the same except for the dots:

Based on this detailed web of rules, of which we have barely scratched the surface, comes art.

Creativity in general flourishes when facing restrictions. Likewise,the field of Arabic calligraphy challenges all the detailed rules of writing. The gold standard is to break rules visually while still obeying them technically. This is art that turns beautiful words meanings into pure visual beauty: 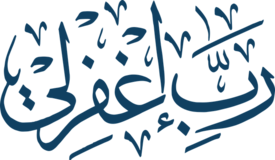 But some types allow more artistic freedom. There are many other styles and variations that have developed over 1000+ years in different areas of the Islamic world. One famous style makes the figure of an animal or other figure using words. Another style of calligraphy looks like a language from another world: 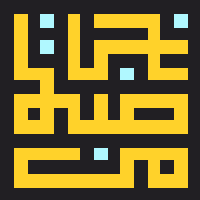 Square Kūfī: “Who is silent is saved”

The example above is the square variation of Kūfī calligraphy. This is the simplest form of Arabic writing that shows a different kind of creativity. These blocky letters are a staple of Islamic architecture, perfect for wall tiles and geometric patterns.

There are amazing regional variations too. Haji Noor Deen, a Chinese Arabic-calligrapher, blends both those writing styles. See his amazing bismilla hirrahmā nirrahīm:3 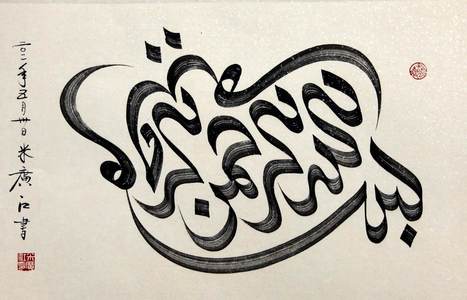 This brings to mind the reality of Islam—pure water that fits in the container of different world cultures, without any compromise to the substance. Architecture, dress and food are more examples of this.

This article is part of the Introduction to Arabic series: a fresh exploration of the language for people at all levels.